The picture doesn't really relate to the post, but posts are more interesting with pictures. Although the post is about fleece, and the sheep in the photo are wearing fleece . . . . 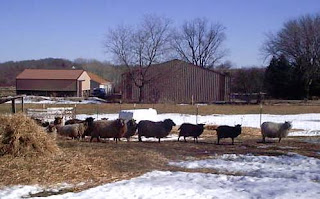 It was suggested by one of the blog readers, that my last post implied that selling the fleeces from the barn cleaning was an afterthought. In fact, the majority of the fleeces are skirted and sold as individual fleeces shortly after shearing in the spring. The fleeces that were pictured in the last post are those that end up on a shelf after I have skirted myself into madness and cannot look at another fleece. Well, not really - I love the feel and smell of a fresh fleece. But life intrudes, lambing gets hectic, summer weather gets too hot, or whatever excuse I find, and some of the fleeces get shelved to be dealt with "later". The Shetland and Coopworth fleeces all get skirted and the majority sold almost immediately. (One year our Shetland fleeces sold out in eight days!). The BWS fleeces are not as colorful and unique as the Shetland and Coopworth and I do confess to getting tired of skirting about 50 fleeces that all start to look the same after a bit. So some of them get shelved and as it gets closer to shearing time again, we clean the barn and the fleeces have to go somewhere - selling them seems a smarter choice than piling them in my parents' barn (some are still there) or in the trailer (not the livestock trailer, we use that occasionally, so I can't hide excess fleece in there for too long), or under the 125 gallon fish tank (that is actually a fleece I bought off of ebay before I had sheep of my own - I should toss that one, as it doesn't really compare to the fleece I have access to now). So this year, I decided to try to sell my leftover fleeces at a deep discount just to move them off the property. And it seems to be working! We only have about half a dozen fleeces left that haven't been spoken for yet. And that number will be a lot easier to hide somewhere, if they don't sell, than some of the excess from year's past!
By the way, we do now have a shearing date - March 18 - and hopefully, this year, we won't all have the flu or be about to come down with it!
Posted by Lael at 9:00 AM No comments:

At least, this is part of it - if this was all I did, I, like Octomom, would not be getting government assistance, but I would be living on food stamps.

This is actually the spring cleaning of the barn - cleaning out last year's fleeces to get the barn ready for shearing, which will hopefully take place in about a month. I started with a corner of the barn heaped with bags of old fleece - 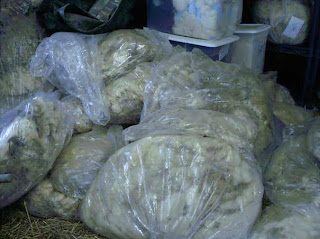 I then take each fleece out one at a time, throw it on the skirting table (I didn't take a picture of that) and throw out the yuckiest parts - the manure tags, really chaffy areas, matted areas - the parts that can't be cleaned up and used by handspinners. Then I post ads on the Internet and the orders come in. We got a very good response to this spring's ad - I offer deeply discounted prices and free shipping within the lower 48, which is a good deal, as I figure about $2 per pound to ship. This is one of the larger orders I received this go-round - 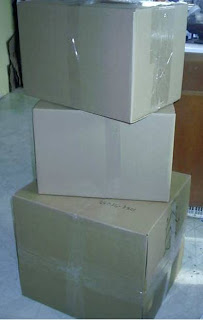 Nicholas is becoming quite well known at the local post office, as on days when I have more than one box to ship, he gets to help me mail them after school. My customers are really quite considerate, though. They usually don't all send their checks on the same day and most orders are for only one box, so I can take care of the shipping by myself. And going to the local post office often results in meeting people I know, so it is kind of like going to the feed store (which I really don't do much and I don't run into people that I know there - there aren't a lot of shepherds locally!)

Now my corner of the barn looks like this - 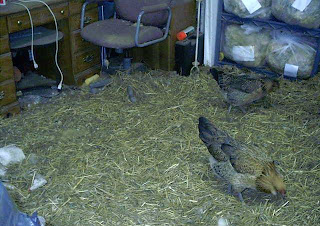 The chickens love the newly exposed "floor" of straw - they can find all kinds of stuff there to scratch through - hopefully, mostly missed grain and not loads of bugs!
And the fleeces are all bagged and labeled, waiting to be shipped out to their new owners. We sheared about 100 sheep last spring and this is basically all that we have left. 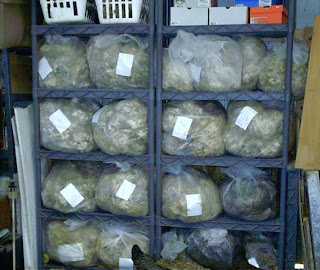 I have been doing a little bit of knitting when I have not been spending my time at the post office. This may look like just an ordinary dish cloth, but it is actually a new family heirloom. Well, not really, but I did knit it from the pattern that my grandmother handed down to my mother before she died. It is not the only pattern she used, and it probably was copied out of a magazine at some point. But the pattern is written in my grandmother's handwriting, so I had to knit it up to see what it looked like (because, unfortunately, I don't actually remember any dishcloths that we had that looked like this). It is not quite even, as I ran out of yarn, but I almost got it squarish and it really doesn't look too bad, even though I did bind off in the middle of a repeat. A very easy knit, took about 3 hours. The time could probably be improved on, if I wasn't watching TV at the same time and insisting on drinking coffee while I knit - I know some people do this multi-tasking very well, but I have a hard time knitting with both hands and drinking coffee. As it is, my coffee usually gets cold, because I get into the knitting and forget to drink my coffee - then I have to get up and stick it in the microwave - then I get to knitting again - and the whole process repeats itself. There you go, Larry, that's why some days it seems like I don't do anything! 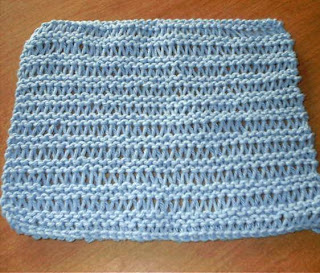 And finally, a parting shot of one of our sheep. This is one of the girls we got from Gordon and Anne Sammons down in Illinois. She is a triplet and VERY friendly - I'm wondering if she was a bottle lamb or at least raised on the bucket. She is a very sweet thing and will push the other ewes out of the way, just so she can have her chin scratched. 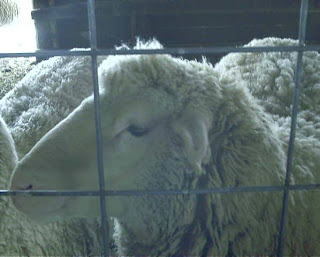