There seems to be a lot of dissent within the North American Shetland Sheepbreeders' Association lately. Some of the folks like the short, crimpy fleeces, some like the long, wavy fleeces. I must say, I have a little bit of both in our flock. In fact, our first sheep were of both varieties, and we purchased them from several "reputable flocks".

There is also a bit of a gap between the breeders breeding for bigger sheep and those of us who like the smaller sheep. We got a lot of comments this past weekend at the Wisconsin Sheep and Wool Festival, where we were exhibiting some of our Shetlands, about how cute and small our sheep were. Well, our Shetlands are the same size today as they were almost ten years ago when we bought our first Shetlands. And we still have one of those original sheep, and she is about the same size as all of our other adult ewes. Shetlands are not "miniature" sheep, but they are small - they are supposed to be small. If you want a nice leg of lamb, get a Polypay or a Coopworth (we have those, too).

When visiting the Shetland barn at the Festival, we noticed some Shetlands that were quite large. In fact, they compared in size to the Icelandics that were being exhibited in another barn. I will have to do some research - I'm not really an expert on the "perfect" Shetland. But I seem to recall that Shetlands were supposed to be finer boned, agile - more "deer-like" to successfully navigate the rocky shorelines of the Shetland Islands. Ewes were to be feminine and the rams should be "manly", but still agile, not heavy, ponderous things.

And the one thing that really gets me is when supposedly reputable breeders sell adult rams with crappy horns. Sometimes a ram lamb will be sold who eventually has fatal horns - I had an absolutely gorgeous ram lamb, with wonderful wide horns, one of our first years with Shetlands. But those gorgeous, wide horns grew right back around, heading for the underside of his jaw. He ended up in little white packages and was very tasty. But year after year, we see adult rams, with terrible horns, being sold to other breeders.

We all have an opinion on what is a good fleece, or whether we like solids or patterns, or whether "bigger is better". But there is really no excuse to keep a ram after his horns take that deadly turn back toward his head. Wether him if you must, take him to market, but don't sell him to another breeder. And if you don't know what good horns look like, see below. While the photo may not be the greatest, the horns are pretty awesome, if I do say so myself. 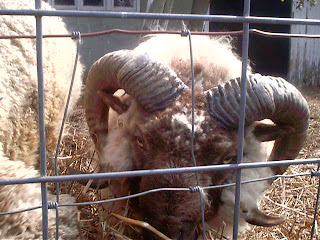 Well, as you can see, I may have squeaked in a blog post before July ended, but I totally missed August. It was hot, we were busy, I was lazy - take whichever excuse you want to use. They were all true at some time or another last month.

To bring you up to date, school has started for another year, Nicholas is now in high school. He seems to be liking it more (at least, so far) than he did junior high.

The heat has subsided - the last few days have even seemed a bit "fall-like" - been tempted to turn the heat back on in the mornings, but I know that it is to be back up in the 80's in a day or two, so am enjoying being able to put on slippers, an extra blanket on the bed, cuddling in the afghan while watching TV in the evenings. The good thing about a hot, wet summer, is the pastures have lasted much longer this year. Last year we fenced part of the hay land for temporary pasture. We haven't had to do that this year. In fact, we have been able to let some of our pastures rest a bit this summer, instead of overgrazing them as in some summers past.

The bad thing about all this rain - well, the mosquitoes, of course. I planted a few flowers and veggies early this summer and that was about the end of the gardening for me. Not being a great gardener anyway, when the mosquitoes are as abundant as they have been this year, I don't like to linger any longer outside than I have to. If I had known that it was going to be so buggy, I might have looked into a CSA and let someone else grow my produce.

We have made some additions to our farm. Thanks to the very generous nature of our friends Stasia and Jeff we have adopted some more sheep, some guinea keets and some goats. We now have 5 beautiful Angora does. 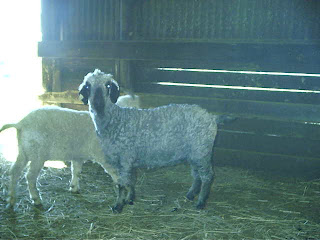 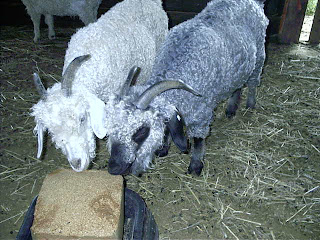 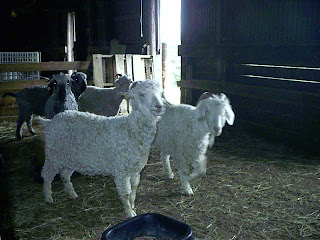 I know that I could probably get better pictures outside, rather than in the darkish barn, but as the girls don't know us very well yet, this is the sort of picture that I get when I step outside with them: 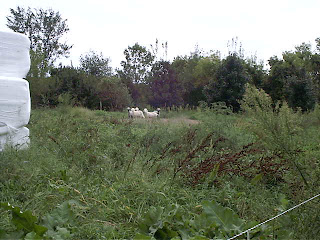 That's them, that little blob in the center of the picture. They trust us being on the outside of the pen while we are in the barn, but if we are outside, they seem to feel the need to remove themselves from our direct area to the far side of the pasture. But they are getting better, they crowd around Nicholas when he feeds them their pellets and they don't immediately rush out of the barn when we go in. For the first couple of days, I wondered if they ever relaxed, but in a few days time, I actually managed to get into the barn without all of them bolting to their feet. I've even managed to get one or two of them to sniff my hand!
Next post, maybe I will have pictures of the new sheep. And, this week we are getting ready to go to Wisconsin Sheep and Wool Festival which is this next weekend. We will again be in the Hall of Breeds, so please stop by and say hi if you are there.
Being very lazy today. My excuse is it's a holiday weekend (I can always find some excuse if I need to), but I have a dozen little Shetland rams that are locked in the barn until I can get the thistles cleaned out of their barnyard, so at some point I have to brave the BIG, BLACK AND YELLOW SPIDERS and venture out into the jungle, clean up the picky, fleece devouring intruders and let our little guys back out to clean up the "good" plants.
Posted by Lael at 12:29 PM No comments: