Not a lot of time to blog today, but here are some pictures of our first lamb of the season. When Larry went out to the barn this morning, mom and baby were lying in the barn, all comfy and cozy, lamb all dried off and napping. The ewe is a first timer - Polypay - the lamb is a Polypay/Coopworth cross ewe. 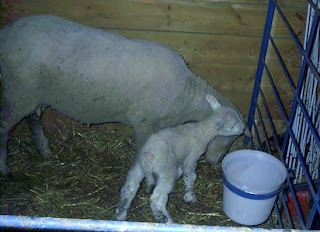 Time for a snack - 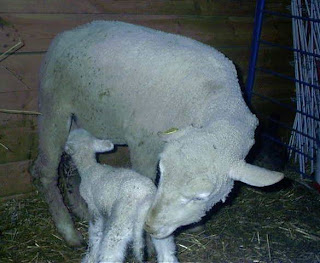 Oh, that camera flash is bright - go away - 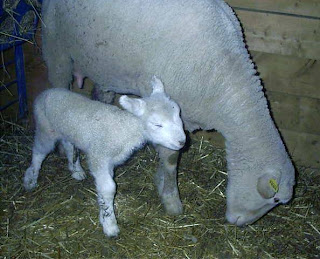 Lambing was potentially to start this past Sunday, and some of those ewes look like they are about to burst, but maybe they heard me say I didn't want to start lambing until April this year. Well, they certainly are trying to avoid lambing in March - although now that it has started, I wouldn't be surprised if we are soon overrun by lambs!
Posted by Lael at 9:30 AM No comments:

That's what I have been doing, but no pictures for you. If you want to see the finished fleeces that we are offering for sale, please check out the web site, www.maplewoodnorth.com (a bit later - I should be working on the web site now, but am, instead, blogging - hey, it's my birthday - I'll do what I want!).

The fleeces look great this year (well, with the exception of our one Clun - she must have slept in the siltiest part of the barnyard!) The Shetland fleeces seemed cleaner and softer than in previous years - or maybe it is just that after a long, cold winter, the feel of fresh Shetland fleeces is irresistible! The Shetlands are all skirted and pictures have been taken. I hope to get those posted on the web site later today, along with a few of the Coopworth that are done, plus our one Jacob and our one Clun Forest.

This past weekend, we resorted the sheep into their respective lambing groups. Most of them were together for shearing - we sorted them back into the ewes who will start lambing this weekend and the ewes who won't start lambing until next month. Some of those girls look like they are ready to pop, so I anticipate the first lambs by Sunday, maybe a day or two earlier if they are having triplets. We also wormed any sheep that seemed to need it.

Sunday, Larry was out in the barn by 4:00 am and by the time I was up shortly before 9:00, the barn was rearranged and ready for lambing to start. We have six jugs (small pens to hold the ewe and her newborn lambs for a day or two after birth) set up, ready to go with hay feeders - I still have to get the water buckets and feed buckets attached. The nursery area is all set to go when needed - just have to shut it off from the rest of the barn with a panel and a gate, when it is needed. Nursery area - a penned area for new moms and their lambs to go to after they come out of the jugs - there they get to "socialize" with other new moms and lambs, but they don't have to deal with the ewes who haven't lambed yet.

I have been working on a knitting project. The dishcloth pattern that was my grandmother's that was mentioned in an earlier post - well, I knit up a bunch of dishcloths to be distributed to the cousins, along with a copy of the pattern, written in my grandmother's hand. I don't know if they'll want a handknit dishcloth (I personally think they would make nice face cloths, you know, exfoliation), but they will have something of Grandma's, sort of, through me. 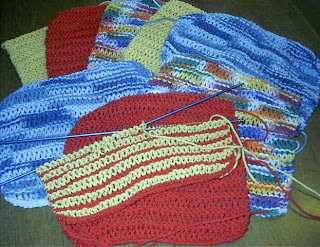 There's eight there, with a ninth on the needles. I still have to weave in the ends on most of them. The colors were fun, although they may not show up well on the picture. Today is grey and rainy, kind of cool and windy. Which is part of the reason I decided to work on the blog and the web site today - good day to stay indoors as much as possible drinking a hot cup of tea or coffee.

Well, that's what I've been doing. What have you been doing?

Shearing went very well this year. Roger was here by about 7:15 Tuesday morning. The temperatures were in the 40's and low 50's throughout the day with grey skies and a sometimes light mist. We had all the sheep in the barns they were being sheared in (we shear in two different barns), snacks and drinks were ready and available, most of the help was assembled. Larry, Nicholas and my dad move the sheep into and through the catch pens and chutes. Mom and Annie (a long-time family friend) alternate sweeping the shearing floor, I bag and label the fleeces. We started with the dozen Shetland girls. Looking at the camera, we have Athena, Cricket, Nutmeg, Cricket's lamb from 2008, Maia and Brie. 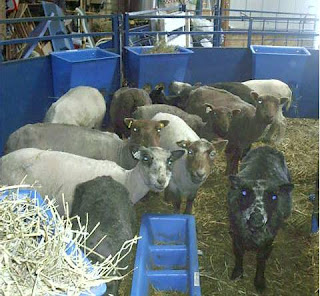 Then we moved on to the majority of our flock - our Polypays, white and colored Coopworths, one Jacob and assorted crossbreeds. After most of them were shorn, we moved them back outside so they could eat again (we hold them off of food and water for 12 -24 hours before shearing). Even in the freezing temperatures, with no fleece, they prefer lying in the sun. They did come back into the barn for the night. 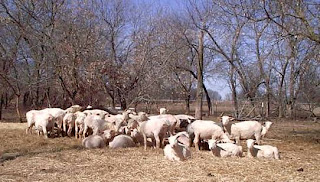 If you look closely, you can see that some of those bellies are getting pretty big. About 1/3 of the girls will start lambing at the end of March. 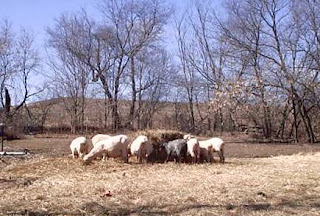 We sheared the majority here in our barn and then moved to our other barn to shear the remaining few ewes and our three BWS rams. We finished up at about 1:30 - Roger was having a cup of coffee at 1:50. 96 sheep in about 6 1/2 hours - I am forever amazed at how fast a person can shear a sheep! Roger had a 4:00 appointment, but the rest of us went in for an early supper of beef stroganoff, which Larry had very nicely prepared the night before. Then we collapsed on the couch for the rest of the evening, watching reruns of NCIS.
Now the barn looks like this - bags and baskets of fleece everywhere you look. I haven't started skirting yet - plan to tomorrow. The last couple of days have been very cold again and I prefer being able to skirt without being bundled up in all my winter attire. 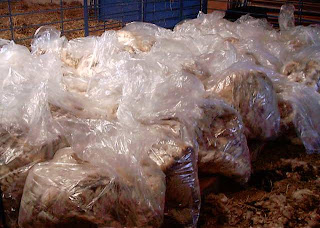 Baskets stacked wherever there is room: 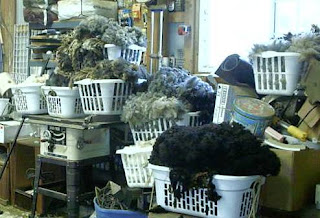 The Shetland fleeces go right into baskets and onto the shelves - I'll start with those. Some baskets contain smaller lamb fleeces, as well as some of the Coopworth, which are really much too big to fit, but after I skirt the Shetland, I start on the Coopworth. And for no real reason, I always skirt the fleeces in the baskets first. Just habit, I guess, as when we had a much smaller flock, all the fleeces went into laundry baskets. It is now more economical, both budget-wise and space-wise, to use bags. 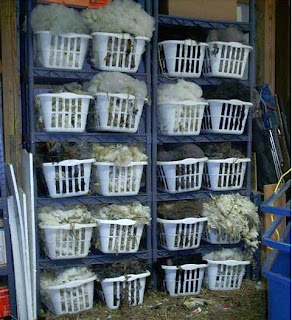 So, how many fleeces do you think I can get skirted before lambing starts in two weeks?
Posted by Lael at 4:18 PM 2 comments:

We actually sheared two days ago, but I didn't have time to blog before shearing, so just play along with me and pretend.

The weekend before shearing it rained the entire weekend. We had lakes and ponds and running rivers all over the property (and we normally don't have any bodies of water on this particular piece of land). Fortunately, we are on sloping land, so the water mostly runs through to the neighbors. I was going to take some pictures of that, but didn't feel like standing out in the downpour. Sunday night, it changed to snow. Because of the inclement weather, we had 96 sheep confined to various barns in preparation for shearing. These pictures are all from the barn here by the house. We had a dozen Shetlands and 67 assorted "big, white sheep" confined there for almost four days.

Cappuccino on the left, Brie in the back and Lavender in the center: 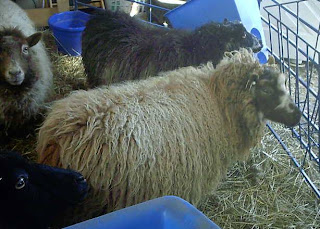 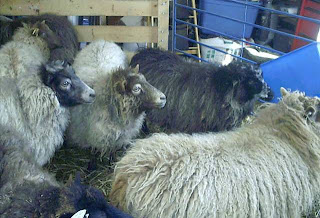 I can't identify the entire group here, as I can't see all of the heads. Saffron is the white ewe in the back, Maia is the musket ewe sort of in the center. I think the grey right in front is Pichu and the dark brown on the right is Sparx. But the fleeces sure looked nice "on the hoof" this year. I am looking forward to seeing them on the skirting table. 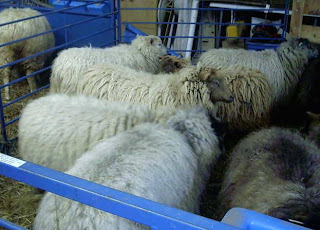 Another group shot. The dark faced ewe at the front of the picture is Sparx, to the right of her, Cappuccino. 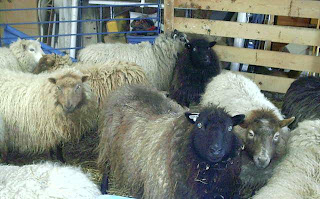 Now on to the group of BWS. Well, this ewe is actually not white. This is one of our colored Coopworths. 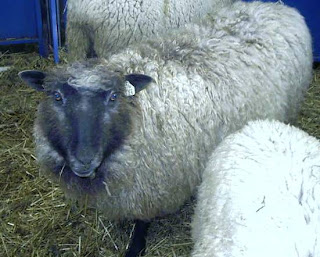 And now a few shots of the remaining 66 BWS. I had thought they would be crowded in the barn, but we had plenty of room, even with those huge fleeces on them. They all look pretty good this year. Looking forward to seeing these fleeces on the skirting table, too! 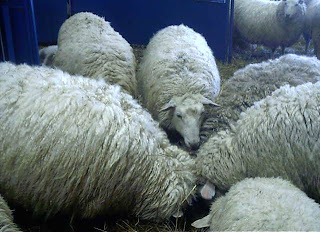 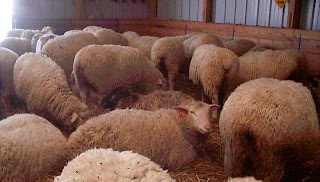 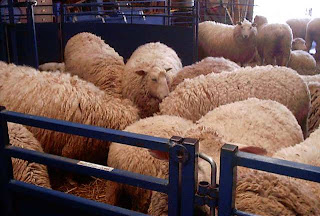 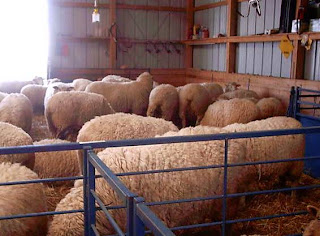 Shearing is scheduled for Tuesday, March 10 (like I said, pretend it's not the 10th yet!) Roger should be here between 7:00 and 7:30 am. The weather is supposed to be rainy, but the temperatures are supposed to be in the upper 40's or low 50's. It will sure beat those years when the temperatures were in the single digits!
Posted by Lael at 3:13 PM No comments: