Rain, that is. We have had two inches in the last two days and, while I understand that it is needed to keep the pastures green, enough is enough! There is a lake in front of the barn, everything is muck and I slip and slide on any surface that is not entirely flat. I haven't been down to the low spot in the Shetland grove yet today, so don't know how bad that is. But all of the babies are wet and, although they are still cute, they are kind of gross when they try to snuggle up to you. And it is very hard to take lamb pictures in the dark, dreary, rainy weather. I did manage to get a couple before the floods - this is one of the two ewes I have to shear yet - yep, she is IN the feeder: 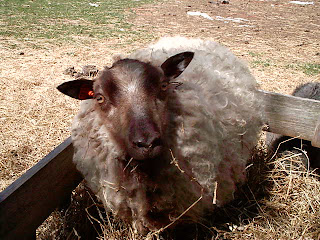 As for lambing, we have two Coopworth ewes that haven't lambed yet - one looks like she will go any minute - hopefully she comes into the barn and does not lamb in the lake - the other is not terribly big and may wait until the last minute. The Shetlands are done - although I did put Gallifrey in with the ewes again this spring, as I didn't have him shorn by the shearer and needed a place to put him while the rest of the rams were being shorn. So there is a slim chance that we will have a few August lambs - although I'm not going to hold my breath, as Shetlands don't lamb well out of season.

And for the obligatory lamb picture, this is one of Sparx's ram lambs - he is a gorgeous grey, not black and white - those light spots on his body are grey - I hope he grows up with good conformation and nice horns (he is standing kind of strangely in this shot - he looks better when his legs aren't all bunched together - his head isn't really as big as it looks!) 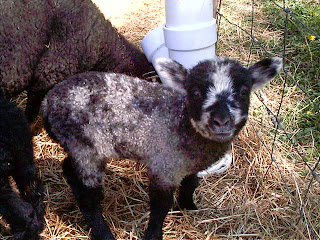 We've got three jugs full in the barn again, so chores today will include tagging, docking, castrating and lamb shots - also worming of the moms. I hate to do all that in miserable weather, but it has to be done. Morning bottles have been fed - soon they will be reduced to two bottles a day. Baby chicks in the brooder. And I have to be down at school at lunchtime, as it is an early release day, so I guess I better get moving. Or maybe just one more cup of coffee?!?!
Posted by Lael at 8:48 AM No comments:

Still Trying to Catch Up

Well, the major portion of this year's lambing is complete. We bred about 65 ewes - Polypays, Coopworths, and Shetlands with a few terminals and one Clun Forest thrown in for good measure. We have over 90 lambs on the ground, about a 50 - 50 split between rams and ewes, five ewes yet to lamb, about five who look as though they were not bred. Of course, they have until early June (technically) to lamb, so maybe those five who have not bagged up will lamb very late. We put all five breeding groups together at the same time last fall and all five rams settled the majority of their ewes within their first cycle - meaning 85 percent of the girls lambed within the first 17 days of lambing season. A very hectic 17 days, but it got it over with.

Lambing went fairly smoothly - I assisted with a few deliveries - one girl wasn't lambing fast enough the day of the FFA banquet, so I nudged her along a bit with a gentle tug on her big single.

One of my best moms (Cappuccino - Shetland ewe), decided this year, that since she was about to go into labor, she would try to steal someone else's lambs. She has never been a problem for me, but this year she chased one poor lamb all over creation until I corralled her in a private pen where she delivered the first of twins just before I wanted to call it a night. Then she presented the head of the second and continued cleaning off the first. Apparently one was enough for her this year, as she ceased trying to deliver the second. Thinking that maybe the second delivery was too hard for her, as the front legs appeared to be back, I gave a gentle tug on him. Well, he "splooshed" right out - I guess Cappuccino only wanted a single this year - maybe she thought if she didn't deliver the second, he would just go away. Actually, she is normally the most laid back mom I have ever seen in the pasture. She has delivered a lamb backwards, no problems. She always twins and, although her lambs are always the "rebellious" ones, she usually has her head in the feeder until you ask "where are your lambs?" and she looks around like she's just remembered she's a mom. But her lambs thrive. Probably because her milk is good since she has no nervous issues.

I do have five bottle lambs this year - five too many. I have two sets of twins whose moms just do not have enough (or any) milk. Both moms are already on the "cull" list. And I have a triplet - born in the wee hours of the morning, Larry discovered them when he went out to the barn very early about a week into lambing. I was still in bed, as it was a Saturday and my intent was to sleep in a bit. He woke me to let me know I had a lamb to tube. So he brought her into the kitchen, near death, very dirty. This is what she looked like after I fed her: That is our Lab mix, Kipper, being the good mom and cleaning her off (she was the cleanest lamb you have ever seen when he was done). Well, I got a few ounces into her, popped her into the playpen and went back to bed. Unfortunately, since Kipper claimed her and I fed her, Mom would not take her back. But "Spot" is our pet now and follows Kipper all over the yard. She tries to nurse off of him, tries to jump up on his back if he sits down. He hangs his head and gives me this look as if to say, "Mom, do I have to put up with my little sister? She's so annoying!" But he did a good job - I think she looks a lot perkier now: 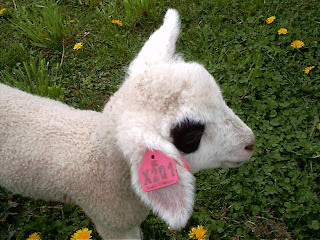 Yes, she has a black eye patch and, no, we weren't very original in naming her "Spot"!
So, now I am attempting to get back to the rest of life as we wait for the stragglers to lamb. I am still trying to catch up on dishes - although I have actually done a little bit of cooking again (during the first 17 days, we ate fast food and sandwiches mostly) - laundry doesn't suffer too much during lambing, as Nicholas has to have clean clothes to wear to school, so I'm sort of forced to take care of that. The playpen is still up in the kitchen, just in case we have any more lambs that need to come in for 24 hours. That will stay up until the last ewe lambs. I did vacuum the living room last weekend, as Nicholas was having a friend over. But the rest of the house looks like a tornado has gone through. That's why I'm blogging - so I don't have to look at the mess and contemplate cleaning it up! I think I'll go out and admire the lambs now!
Posted by Lael at 9:38 AM No comments: