I would like to introduce you to the newest member of our family. This is Zeus: 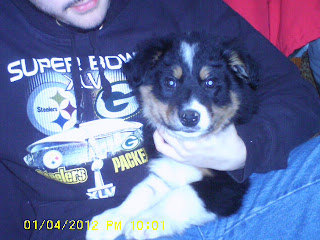 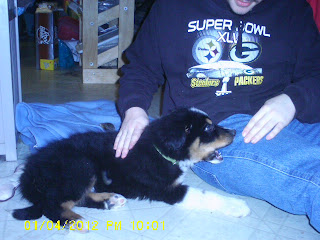 He is a Border Collie. A bit over 2 months old, tri-color, very sweet and very smart. I'll probably jinx it, but I have never had a puppy this young with such good toilet habits. He was born in a box stall on a horse farm and confined there, as the breeders were afraid the horses would step on the puppies if they were left to roam. The owners bred their female on purpose, then decided after the puppies were born that maybe that hadn't been the smartest thing they ever did, so the puppies ended up at a nearby rescue. He was at the rescue for less than a week when we picked him up this past Wednesday evening. He sleeps through the night (although those nights are pretty short right now), has yet to have an accident in the house (although we are pretty vigilant about taking him out when he wakes, after he eats, etc), so far has ignored the Xmas tree, which is still up, but is very interested in the cats' litter box. He is not afraid of the goats or the sheep (of course, they are on the other side of the fence at this point in his life). He responds well when we tell him "no" for inappropriate behavior. He does seem to be curious about chicken poop, but it is hard to avoid that on a farm. At the moment, he is curled up behind my chair here at the computer.

It is wonderful to have a puppy in the house again, although I did hope to sleep beyond 6:15 this morning. Oh well, I've lived through sleep deprivation before in my life. But I think I was better able to handle it in college! So if you see me on the street and I don't respond - well, I might be sleep walking!
Posted by Lael at 9:24 AM 1 comment:

And this year, I will try to post here more often. I would say that this is my New Year's resolution, but that would just be asking for trouble, as I don't think I have ever stuck with any of my resolutions. But I did so poorly at posting last year, that it shouldn't be too hard to improve this year!

Looking back on last year, in addition to not posting on the blog, we started our new business venture, which most of you know about, if you still read my meager posts. Hearthside Fibers began in earnest just after the first of the year, we did about half a dozen fiber shows, I finally got the Etsy store launched in the fall, I set up a Facebook page and we placed our product in the local yarn store, Kaleidoscope Fibers, in Lake Mills, WI.

In the coming year, we are already booked into an additional one or two fiber shows and are considering a couple more. I plan to get more product into the Etsy store. We are adding a few new yarns and rovings.

On the sheep and goat end of things, we have downsized the commercial/meat sheep, but have retained most of the goats and fiber sheep. So for our fleece customers, we will have Shetland fleeces in a few months (and some of those fleeces look absolutely gorgeous "on the hoof"), a few Icelandic fleeces, maybe some mohair and a few other assorted fleeces off of the "pets" that we didn't sell. Lambing/kidding begins at the very end of March, and may continue into June, as we still have one ram in with a few of our ewes - he was put in as a clean up ram, just in case the ram lamb we originally had in with that group didn't do his job!

Not much in the way of pictures with this post. We have had very little snow here in SE Wisconsin so far this winter, unlike much of the rest of the country! So no pretty scenery shots. Very odd for us and I am nervously waiting for the other shoe to drop. There is no way that this mild weather and lack of snow can last much longer. Today it is hovering around freezing, though, and the winds are brisk, so I am glad that I will be sitting in the living room, watching the last regular season Packer game (GO PACK!) instead of in Lambeau with my cousin and his girlfriend.

So, since every year I try to get a decent picture of the Xmas tree, I will leave you with best wishes for the New Year and a shot of our tree from early Xmas morning - 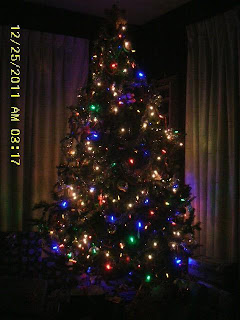