Just wanted to check in before March ended. And before it gets really busy here, as lambing/kidding should begin any time now.

We sheared the sheep and the few Angora goats about a week and a half ago. We've reduced the flock size quite a bit, so it wasn't as hectic this year and the barn wasn't as crowded. And before we started that morning, I took a few snapshots of the sheep waiting for their turn to get a haircut. That's Pikachu in the middle of the group, a Polypay ewe - she's about four years old and was one of our bottle lambs that year. 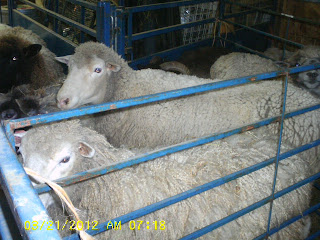 Going every which way in the chute. Fortunately, it's not my job to muscle some of those bigger girls around in the chute. How they manage to get themselves turned around in there is beyond me! That pretty brown ewe is Brownie, a Polypay/Coopworth cross ewe. 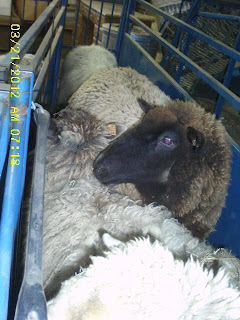 The Shetland ewes, waiting their turn. They look a bit menacing, with those glowing eyes! 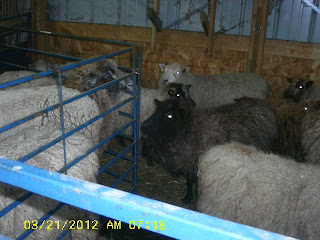 And Zeus did his part to help with the shearing. We actually tried giving him a little pen, so we didn't have to keep such a close eye on him. But he managed to squeeze under the fence and spent most of the morning in with my dad, who was in the pen area the sheep went through after they were shorn. His lead was tied to the fence, so he couldn't chase the sheep, but if the sheep didn't go straight through the "exit" area and tried heading back toward the shearing platform, Zeus would bark at them until they turned around and headed in the right direction! 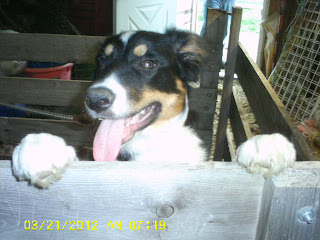 And now that shearing is over, I have boatloads of fleece to skirt and get up on the web site. And I've got tubs of yarn and roving that I have to dye before Wisconsin Spin In. It's April 21 and 22 at the Waukesha Expo Center in Waukesha, WI - if you're in the area! Please stop by and say hi if you can make it.

Well, must get back to doing something more productive than blogging. I've got some of our Star Dust yarn waiting to be dyed - what colors should I do today? And I have a bunch of worsted weight waiting to be tagged. It's too dark and dreary today to take pictures for our Etsy store. Oh, who am I kidding? You all know that before I get to that, I have to have another cup of coffee!

In closing, a couple more pictures of Zeus - often when I am on the computer, he is under the desk. It's hard to get a picture of him under there, as he is usually up as soon as I push the chair back - he must have been very tired on this occasion. 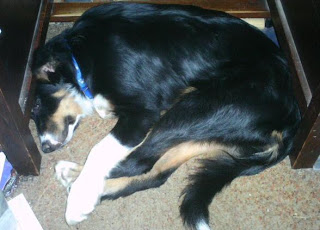 And a more typical posture. Ready and waiting for his next command. 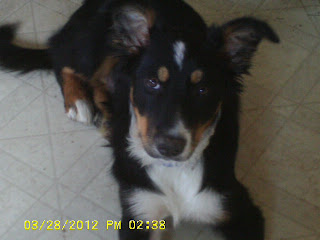 Zeus reminds me a lot of Jackson as a youngster - only with a long tail!